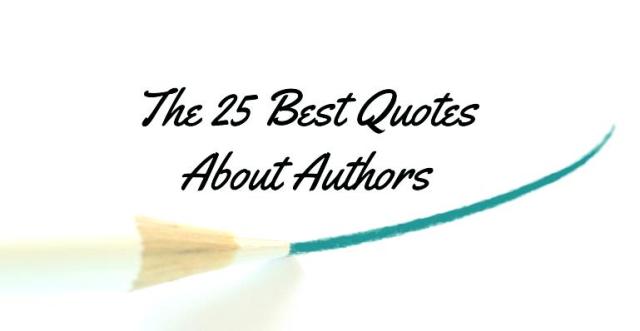 The 25 Best Quotes About Authors

A writer never has a vacation. For a writer life consists of either writing or thinking about writing. ~Eugene Ionesco

All writers are vain, selfish and lazy, and at the very bottom of their motives lies a mystery. Writing a book is a long, exhausting struggle, like a long bout of some painful illness. One would never undertake such a thing if one were not driven by some demon whom one can neither resist nor understand. ~George Orwell

A writer is someone for whom writing is more difficult than it is for other people. ~Thomas Mann

Writers and artists know that ethereal moment, when just one, fleeting something–a chill, an echo, the click of a lamp, a question—-ignites the flame of an entire work that blazes suddenly into consciousness. ~Nadine C. Keels

But writers and their woes: they couldn’t be parted. Not for anything. ~Naomi Wood

To say that a writer’s hold on reality is tenuous is an understatement – it’s like saying the Titanic had a rough crossing. Writers build their own realities, move into them and occasionally send letters home. The only difference between a writer and a crazy person is that a writer gets paid for it. ~David Gerrold 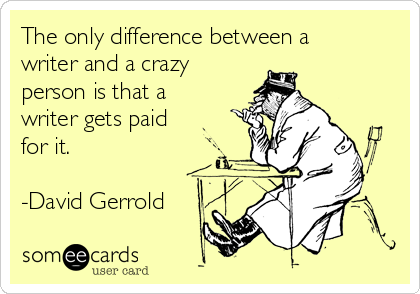 Authors were shy, unsociable creatures, atoning for their lack of social aptitude by inventing their own companions and conversations. ~Agatha Christie

There is no idea so brilliant or original that a sufficiently-untalented writer can’t screw it up. ~Raymond E. Feist

Good writers define reality; bad ones merely restate it. A good writer turns fact into truth; a bad writer will, more often than not, accomplish the opposite. ~Edward Albee

A story is a letter that the author writes to himself, to tell himself things that he would be unable to discover otherwise. ~Carlos Ruiz Zafón

If you have any young friends who aspire to become writers, the second greatest favour you can do them is to present them with copies of The Elements of Style. The first greatest, of course, is to shoot them now, while they’re happy. ~Dorothy Parker

Authors like cats because they are such quiet, lovable, wise creatures, and cats like authors for the same reasons. ~Robertson Davies

What I like in a good author is not what he says, but what he whispers. ~Logan Pearsall Smith

I’m the kind of writer that people think other people are reading. ~V. S. Naipaul

It’s better not to know authors personally, because the real person never corresponds to the image you form of him from reading his books. ~Italo Calvino

The only reason for being a professional writer is that you just can’t help it. ~Leo Rosten

The writer has little control over personal temperament, none over historical moment, and is only partly in charge of his or her own aesthetic. ~Julian Barnes

Either a writer doesn’t want to talk about his work, or he talks about it more than you want. ~Anatole Broyard

I suspect that most authors don’t really want criticism, not even constructive criticism. They want straight-out, unabashed, unashamed, fulsome, informed, naked praise, arriving by the shipload every fifteen minutes or so. ~Neil Gaiman

The historian records, but the novelist creates. ~E. M. Forster

Crippled and crazy, we hobble toward the finish line, pen in hand. ~Siri Hustvedt

3 thoughts on “The 25 Best Quotes About Authors”