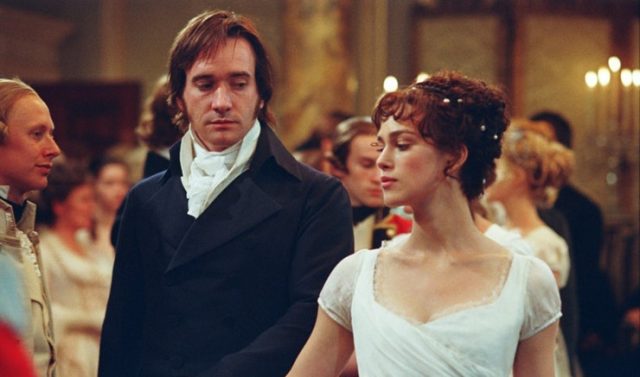 Even now, centuries after her works were published, Jane Austen’s wisdom remains very much alive, gracing the pages of calendars, postcards, posters, canvas bags… oh, I don’t have to tell you, because you own it all. And some of the best advice Austen ever gave? In the department of love. It makes sense, though, right? Relationships are at the core of Jane Austen’s works, after all: relationships between siblings, fathers and daughters, and friendships. Perhaps the most interesting and memorable relationships in her novels, though, are the romances. There’s simply no author who writes about love quite like Austen does.

Austen’s own love life has always been a bit of an enigma – she never made it to the altar herself, which can often seem at odds with her books. In fact, the writer’s romantic life is a source of fascination, of boundless speculation: numerous works have tried to assign her a romantic history, including the charming movie 2007 Becoming Jane.

Regardless of Austen’s own backstory, we see ourselves in her pages – and her words tell us that she understood deeply the thrills and challenges of falling in love. What is so powerful about the romantic relationships in Austen’s novels is that love is a form of growth and self-knowledge – the experience of falling in love frames her characters’ coming-of-age stories, or prompts their later-in-life reinventions. That’s why the love stories of Darcy and Elizabeth, or Knightley and Emma, continue to feel both so powerful and so relevant. By now, most of Austen’s best romantic couples are household names, and her plot lines have inspired echo after echo of modernized retellings, from Bridget Jones’s Diary to Clueless to the Lizzie Bennet Diaries (PSA: those of you who haven’t yet watched the webseries and its cousin, Emma Approved, do it now. Everything else can wait.)

Even if your copy of Pride and Prejudice is, by now, frayed and over-underlined, it never hurts to revisit Austen’s works – and re-experience the humbling, empowering love stories that drive each of her books. Here are 14 Love Lessons From Jane Austen:

1. Try not to judge at first sight

I’m going to open with the obvious. As any self-respecting Austen fan would know, Pride and Prejudice was initially titled First Impressions, and this is a central theme in the book. We all know how it goes: when Darcy and Elizabeth first meet, they judge one another pretty harshly, but as the novel unfolds, they both come to realise that there’s a lot more to the other — and to themselves — than what first meets the eye. The plot of Pride and Prejudice is, by now, a romantic comedy trope: two people who hate each other realise that they have more in common than they thought and perhaps without really meaning to, fall in head-over-heels in love. Pride and Prejudice follows the internal growth of each of these iconic characters — for Darcy and Elizabeth, the experience of falling in love is humbling and requires a great deal of soul-searching.

2. The right kind of love is the love that makes you want to become a better person

True love does not come easily to Darcy and Elizabeth. Both of them must, in their own way, rise to the challenge. Yes, the book ends in their marriage, but their marriage is only possible because they’ve both grown enough to admire and respect one another, flaws and all.

3. Don’t let a third party meddle in your relationship

Jane and Bingley, I’m looking at you. Even accounting for 19th century social conventions, these two are incredibly gun-shy, and both of them let their flaws get the best of them. Jane allows her shyness and reserve to be interpreted as lack of interest, and Bingley yields to his own insecurities, letting himself be convinced that she doesn’t care for him. (Caroline Bingley: 1, Jane: 0.) Maybe if they had communicated better, this almost-catastrophic misunderstanding could have been avoided — but then again, that would totally ruin the plot of Pride and Prejudice.

4. Don’t marry for money (but having money doesn’t hurt!)

I’ve always loved the passage in Pride and Prejudice in which Elizabeth teases Jane about when she first realised she had feelings for Darcy. “It has been coming on so gradually, that I hardly know when it began,” she says “But I believe I must date it from my first seeing his beautiful grounds at Pemberley.” (Sigh. I can almost see the twinkle in her eye.) While Elizabeth is clearly joking, there is some truth to her flippant response. Seeing the place where someone grew up and meeting people who knew them when they were children can speak volumes about their character — and there’s a special kind of affection that comes from learning about how someone’s past has made them who they are.

Or the novels of the 18th century. Back when Austen was writing Northanger Abbey, novels were seen much the same way we see bad TV (or actually, probably worse). Intellectuals (specifically male intellectuals), worried about what reading novels might do to women’s oh-so-fanciful minds. Austen both rejects and embraces this sentiment in Northanger Abbey, setting out to prove that just because gothic novels like Anne Radcliffe’s Mysteries of Udolpho are sensationalist and implausible (but still fun!), doesn’t mean that novels can’t represent and examine reality. In fact, as Austen sets out to prove, true emotion can be as painful and scary as getting kidnapped by a crazy, obsessed suitor. The same is true of love. While Henry Tilney and Catherine Morland’s story is hardly sweep-you-off-your-feet romantic (though it is pretty sweet), it’s based on mutual understanding and shared experiences.

6. Do not trust words over actions

This is a lesson for Catherine as much as it is for her brother James. Both of them are taken by the charming, airy Isabella Thorpe — and it takes them a little too long to realise that she’s only in it for the money. (Boy, does Isabella miss the mark.) Don’t make excuses for people’s actions — more often than not, people’s actions tell you a lot more about their true intentions than their eloquently expressed, oh-so-profound emotions. (And yes, that is Carey Mulligan and Felicity Jones.)

7. Be patient and steadfast

You’ve got to give Mansfield Park’s Fanny Price props for all her patience. She stood by Edmund Bertram through his awkward, misguided crush on Mary Crawford (a fascinating character in her own right.) Yes, some might argue that Fanny is a bit too passive, too willing to wait on the sidelines for her cousin (yes, I know) to notice her. Still, there’s something to be said for the way Fanny allows Edmund make his own mistakes and come to the conclusion that she’s the best person for him on his own. (Right?) To be honest, I’ve always admired Fanny. Like many of Austen’s other heroines, she is strong-minded and stands by her convictions — and these are traits any of us can raise a glass to.

8. It’s OK to be impulsive, but keep a good head on your shoulders

Emotions are as powerful as they are important. But as Marianne Dashwood learns in Sense and Sensibility, when people show us who they really are, we need to pay attention, and not allow ourselves to be completely taken over by emotion.

9. Don’t be so scared to say what you feel

It is a truth universally acknowledged that rejection stings. A lot. But Sense and Sensibility’s Elinor Dashwood and Edward Ferrars would have gotten a lot further if they’d just admitted their feelings to each other — hell, even to themselves. I know, I know, it would have violated social conventions and all that (and Elinor is nothing if not a stickler for proper manners), but come on, they would have saved themselves so much unnecessary suffering.

Marianne is broken-hearted when Willoughby shows his true colors, but she eventually manages to open her heart to Colonel Brandon — who ends up being exactly the kind of husband that she needs. Still, it takes more than Elinor’s levelheaded prodding to get her to give Colonel Brandon a chance. Keep your eyes open — you never know who you might be overlooking.

11. It’s never too late for a second chance at love

Second chances are, in fact, at the core of Persuasion. When Captain Wentworth reappears in Anne Elliot’s life after eight years apart, she is floored. She and Wentworth have a history: a short-lived romance in their early twenties that came to an abrupt and painful ending. Despite being completely in love with him, 19-year-old Anne rejected his marriage proposal based on her trusted friend Lady Russell’s advice, because Wentworth could not provide her with the life that she was used to — and also, due to fear of holding him back in his career. Though it takes these two some time to make their way back to each other, Anne and Wentworth eventually discover that their feelings have not changed through the years — in fact, getting to know each other again as adults only deepens their love and understanding. Wentworth eventually swallows his pride to ask the woman he loves, once again, if she will spend the rest of her life with him — writing the famously impassioned line: “I am half agony, half hope.”

12. Don’t give up on the person you love

Yes, Anne had said no to marrying him, but even Wentworth admits that he was a fool not to try to find her after he’d established himself professionally in the navy and was able to marry. While he did eventually find his way back to her, he could have saved them both a lot of heartache if he’d held fast to his conviction that they belonged together. Life (or, OK, Austen’s pen) gave Anne and Wentworth a second chance at love, but they very well could have done this for themselves.

13. Sometimes the right person has been in front of you all along

Sometimes you fall in love with your best friend. Emma is a wonderful, powerfully-written character study, among other things. Despite thinking herself above love and marriage, Emma Woodhouse eventually comes to understand that there is and always has been only one man for her. As she tries her hand at matchmaking, convinced that she knows what’s best for everyone, Emma realises that she’s a little more vulnerable and a little more (dare I say it) flawed than she’s ever allowed herself to believe. Her good friend Mr. Knightley, however, has always seen her for who she is — and loves her all the more for it.

14. Often the best kind of love isn’t flashy but steady, loyal, and uncompromising

Mr. Knightley does not subscribe to Frank Churchill’s pomp and circumstance, but he is an intelligent, fair-minded man who is capable of loving passionately — even if his always-calm demeanor suggests otherwise. “If I loved you less, I could talk about it more,” is one of my absolute favourite Austen lines. Austen really gets at just how deeply Mr. Knightley feels for Emma — and how, though he may not be one for big romantic gestures, he truly understands and respects her (sounds boring, I know, but it’s rarer than you might think.) In fact, because of this, Mr. Knightley may just be the all-time best Austen hero.