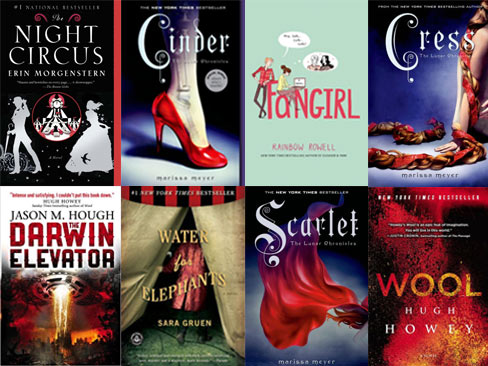 If you are doing NaNoWriMo, you will know by now that just getting it done is a challenge. So in order to provide you with some inspiration to keep going, here are 8 bestsellers that started out as NaNoWriMo projects.

Water for Elephants, by Sara Gruen. Yes, the book that was on the best-seller lists for over a year, that was so popular that you read it in three different book clubs, and was turned into a movie starring Reese Witherspoon and Robert Pattinson, started as a NaNo novel. This book is easily one of the biggest NaNoWriMo success stories, except for maybe…

The Night Circus, by Erin Morgenstern. The buzz for this best seller was everywhere in 2011, and judging by its rapturous reviews and strong sales (not to mention the fact that the movie rights were snapped up by the producers of the Harry Potter films), the hype was warranted. Not bad for something that began as 50,000 words of unconnected scenes and imagery. What eventually became The Night Circus began life in 2004, seven years before it was finally published.

Fangirl, by Rainbow Rowell. Granted, Rowell had already published her first novel, Attachments, and sold her second, Eleanor & Park, when she sat down to write Fangirl in 2011. And though the book ended up being double the 50,000-word monthly goal, she credits the exercise for forcing her to dive into the world of her story and characters like never before, producing “some of the bravest writing” she’s ever done.

Wool, by Hugh Howey. Howey’s dystopian sci-fi novel is one of those credited with putting self-publishing on the map: after selling tens of thousands of ebooks directly to readers, he signed a six-figure deal with a major publisher. Wool was originally issued as five separate novellas; Howey wrote three of them (and even published one!) in November 2011.

The Darwin Elevator, by Jason M. Hough. Hough’s first NaNoWriMo attempt resulted in a 50,280-word novel that “fell apart” after one good chapter. His second eventually became a New York Times best seller, the first in a trilogy of sci-fi thrillers that has earned the author comparisons to recent Hugo Award–winner John Scalzi.

Cinder, Scarlet, and Cress by Marissa Meyer. Each of the three books in Meyer’s successful YA series of futuristic reimaginings of classic fairytales began as NaNoWriMo projects. How’s that for consistency?

Hopefully, proof that all your pain can amount to something positive will have reignited those burning desires that got you taking part in the madness in the first place. Now, back to the writing desk with you!