An interesting and useful article about using song lyrics in your novel. Makes for a very informative read. Enjoy!

Music is great for writing. Pop those headphones in, start up your two-hour Epic Music track or your carefully curated, book-specific playlist, get in your headspace and go go go.

Music is not great for reading. When I edit a manuscript with song lyrics used as epigraphs, or quoted from one character to another, or someone singing along, I have standard cut-and-paste language:

Consider whether these lines are necessary: using song lyrics falls under a specific copyright area that is not subject to fair use, and obtaining permission is tedious and can be difficult and expensive.

The short answer to “What about using some song lyrics in my memoir?” is “You can’t.” To elaborate, songs written after 1923-ish (depending on when you read this blog post) are almost certainly under copyright. The singer or band associated with the song may or may not be the writer(s). Once you google to find the writing credits, you’ll need to track down the publisher through ASCAP or BMI. The publisher does not want to talk to you until you have a publication contract, or specific, written publication plans including where you’ll be selling the book, the cover price, and how many copies you’re printing. Then the publisher bills you.

It can get expensive, Blake Morrison tells the Guardian:

But what about “fair use”?

Fair use is the legal principle allowing us to quote lines or paragraphs from books under copyright. Quotations are fair use if the number of words used is a very small proportion of the total words in the original work; if the quote is properly attributed; and if it’s essential to the point you’re making in your own work. Song lyrics have not yet been held to a “fair use” standard. Arguably, even a line of a song is a fairly large proportion compared to say, 200 words from a 90,000-word novel. But poetry can be fairly used and often is. What makes songs different?

Publishers with deep pockets, excellent legal teams, and a strong precedent of defending their copyrights.

Beyond legal battles, it’s worth it to consider what impact the quoted lyrics will really have in your book. Does your reader associate “Janie’s Got A Gun” with that beautiful night you sat in a convertible, watching the ocean roll in below the hills? Or does she remember her school’s anti-violence initiative that used the literal message of the song? Will readers from another generation even know the song you’re quoting? Will they think of it as “Mom’s music” instead of “pulse-pounding jam”? Writers can’t control how readers react, so we might as well use words we can craft ourselves.

In the Brevity Podcast Episode 8, Geeta Kothari and I discussed using quotes within essays and stories. In her experience as an editor for Kenyon Review, lyrics often pull the reader out of the story on the page and into their own associations with the song. JoBeth McDaniel, from the Rush editorial board, mentions in the same episode that even quoting other non-song writing raises legal issues that editors just don’t want to deal with.

Sure, it’s a great feeling when a single lyric conjures up a world of emotion in our heart. But it’s both uncertain and a bit lazy to expect that line to do the same for every reader. Instead, ask yourself what emotional purpose that song serves, and put that feeling in the setting, in the narrative, in the dialogue. Or obliquely quote in a way that makes knowledge of the original song unnecessary:

He banged his head to Sweet Child O’ Mine and I wished hard I could like Guns N Roses. (Titles are OK!)

On the radio, Springsteen was on fire, singing his creepy lyrics about Daddy not being home.

We rolled down the windows and cranked up the stereo–GooGooDolls, The Cure, KLM, all the music everyone was listening to, the bass throbbing in my chest and making me feel like I was part of everyone.

You’ve got something important to say. Don’t lean on a song to say it for you. Use your words. Use your images. Use your experiences. Trust in your power to create your own music in the reader’s head. 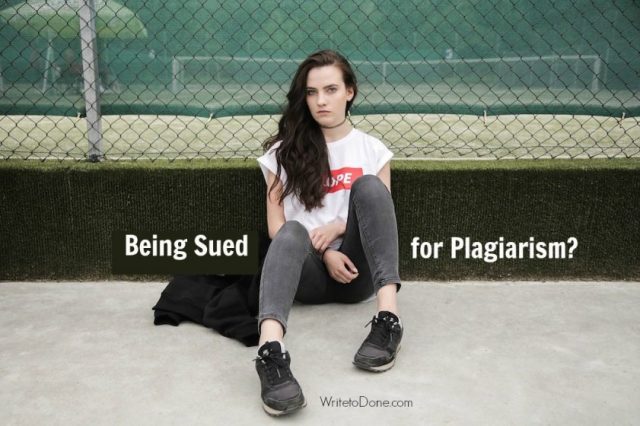 Imagine someone to suing you for half a million dollars because you failed to attribute their work correctly.

It would be a shock, right? But believe me, it’s definitely possible.

So one of the most important things you can do for your writing career is to learn the rules of attribution.

Why? Well, for one, failure to follow them could spell a heap of trouble… like getting a court order for half a million dollars.

Just take a look at the headlines from this summer. Melania Trump stirred up controversy with a speech that bears a striking resemblance to one made by Michelle Obama in 2008, and Mexican President Enrique Peña Nieto faces a 23 percent approval rating following accusations that he lifted almost a third of his law school thesis from other works.

Plus, it’s a matter of ethics.

It’s one thing for writers to draw inspiration from past works and the world around us; that practice is encouraged on this site as well as others. But it’s quite another to take someone’s research, data, ideas or images and try to pass them off as our own. It’s unscrupulous.

Of course, not all cases of plagiarism are deliberate. Some writers don’t know the rules of attribution or think they’ve adequately followed them, only to have another party beg to differ.

Take this case from The Washington Post, in which an expert in the history of technology accused a freelance writer of plagiarizing one of his early articles. The freelancer claimed she thought citing a book of essays — in which the tech expert’s article was included — was sufficient attribution, even though she never directly cited the tech expert. She stated that she “attributed to my best judgment.”

Mistakes happen, but even if your motives were pure, do you really want a plagiarism accusation hanging over you for the rest of your career?

What You Need to Know to Avoid Being Sued

Direct quotes. If you use a person’s specific words, you must put the words in quotes and give credit to the speaker. “I know not what course others may take; but as for me, give me liberty, or give me death!” Patrick Henry said.

Information and ideas. If you get information or ideas from somewhere else, credit the source, even if you use your own words to describe it. Thomas Jefferson was known to greet White House guests while wearing his robe and slippers, NPR reports.

Research and stats. You didn’t pull those numbers from behind your ear, did you? Give credit to the original source of any data you cite. Up to 100,000 people visit the White House every month, according to WhiteHouse.gov.

Opinion or uncertainty. If you’re stating someone’s else’s take on the matter, source it: The best foreign policy president of the 20th century was FDR, according to The Atlantic. Similarly, if you’re uncertain about the facts, source it: FDR may have been suffering not from polio but Guillain-Barré syndrome, according to a report from the U.S. National Library of Medicine.

The Tricky Business of Image Attribution

What can you do, then?

Companies love it when you share these content assets; it’s one of the reasons they create them. They want them to be shared — not only does it help establish them as an authority in their industry and draw traffic to their site, it’s part of the culture of sharing that Leo Babauta discusses here.

What constitutes “proper credit?” Two things: Mentioning them in your copy and linking to the original image.

There’s another angle to this: Attribution boosts your credibility. When you cite ideas or facts and back them up with proper attribution, you substantiate the point you’re trying to make. You’re telling the reader, This isn’t just my take on the matter — XYZ feels the same way. Compare, for example:

One of the most important skills for a president to have is good public communication skills.

One of the most important skills for a president to have is good public communication skills. In fact, in his book, The Presidential Difference: Leadership Style from FDR to George W. Bush, Fred Greenstein lists “effectiveness as a public communicator” as a major factor contributing to presidential performance.

See the difference? When you provide a source that backs up what you’re saying, you give credence to your point.

Do Links Count as Attribution?

No, they don’t. That’s my opinion. Some would argue that in this digital age, a link is sufficient. I disagree. Note from the Editor-in-Chief, Mary Jaksch: For online writers, a link is a clear attribution (if it’s not a poll!)

Eight in 10 Americans believe that other people were involved in a conspiracy to assassinate President Kennedy.

Eight in 10 Americans believe that other people were involved in a conspiracy to assassinate President Kennedy, according to a Gallup poll.

First, links get stripped. If the link was removed at some point, then you simply have a statistic with no source. Attributing the source takes care of this problem.

Second, the person or organization who did the research or came up with the idea has earned the right to be named. It’s only right.

People get rightly upset where you use someone else’s words, images, ideas or research in your work without properly crediting the source. Intentional or accidental, it smacks of deceit nonetheless.

Perhaps Steve Buttry, Director of Student Media at Louisiana State University, said it best: “Attribution is the difference between research and plagiarism.”

Knowing the guidelines of attribution will prevent you from making this type of ethical error and help you remain in good standing with editors and readers everywhere.